Hong Kong, October 8, 2014 – QIMA, a leading quality control service provider that partners with brands, retailers and importers around the world to secure, manage and optimize their supply chain, today announces its 2014 Q4 Barometer, a quarterly synopsis on outsourced manufacturing and the quality control services industry. 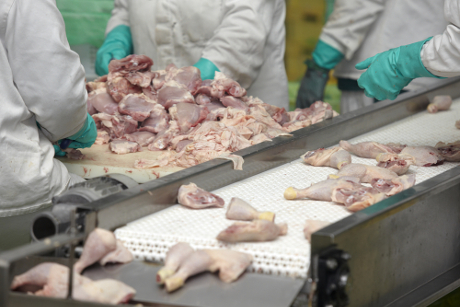 Several food scandals in China over the past quarter have placed pressure on brands to improve their food safety standards. The largest scandal involved expired meat being sold to Yum! Brands and McDonalds.1 In another incident, police seized 30,000 tonnes of chicken feet that had been soaked in hydrogen peroxide, 2 and in September a gang was arrested for having sold over 90 million toxic gelatine pill capsules.3

This risk is translating to increased orders for food inspections, which jumped 21.3% vs. the previous quarter and 30% year over year according to AsiaFoodInspection data, QIMA's food quality control services arm. AFI figures show that 51.7% of food inspections conducted between Q1 and Q3 2014 in mainland China have failed.

China’s Food Safety Law is currently being re-drafted. Liability and penalties have been increased significantly and it will place the burden of proof on the manufacturer to prove that its food was compliant with food safety standards. The new system will also motivate consumers to be more proactive in coming forward with a monetary reward system for whistleblowers. 4

China has responded to the September launch of India’s ‘Make in India’ campaign with a government backed ‘Made in China’ campaign. India’s campaign, which seeks to boost high tech manufacturing, has not offered specifics on incentives. The Chinese campaign is offering tax breaks to manufacturing companies to upgrade their machinery, in addition to tax reductions on imports of high tech equipment for key industries such as electronics.

China's electronics manufacturing sector is mature but standards are mixed, with QIMA data showing that in Q3 2014, 24.5% of electronics inspections were beyond AQL (Acceptable Quality Level), an increase of 9.1% in quality levels compared to same quarter last year, but comparable to India, at 27.8%.

Ethical Audits are a continued focus with China responding by imposing stricter punishments for poor conditions that violate their Workplace Safety Law. These include fines of over $3.2 million USD for serious workplace incidents as well as wage garnishments for managers of up to 80%.5

Ethical audits conducted by QIMA in China have had a 26.4% critical failure rate so far this year, an increase from 22.9% in 2013. That figure is close to India at 28.6%. QIMA data shows that Hygiene, Health and Safety, followed by Working Hours, Wages and Benefits, are the most common causes for failure of ethical audits in China.

Following recent economic liberalization in Myanmar, QIMA has started seeing increased demand for inspections there in Q3 2014, primarily in the textile and apparel industry. Myanmar now seems to be a viable option for buyers looking to mitigate rising costs in China with a "China +1" sourcing strategy. Daily wages in Myanmar are estimated at $1.10 per day, compared with $2.50 in Vietnam, $2.80 in Bangladesh and $18 in China. The Myanmar government is ramping up support with the Ministry of Border Affairs (MBA) by running a program to train 50,000 garment workers which has already successfully placed 20,000 in jobs.6 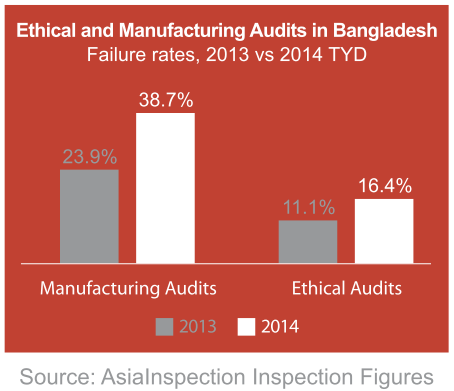 The Bangladesh Garment Manufacturers and Exporters Association (BGMEA) says that over 200 factories in Bangladesh have been shut down since the collapse of Rana Plaza last year, costing millions in export revenue and thousands of jobs.7

The trend is likely to continue until standards improve. QIMA data shows that while we saw a rise in audits performed, 38.7% of manufacturing and 16.4% of ethical audits have failed so far this year in Bangladesh, whereas 23.9% and 11.1% failed in 2013, respectively. Exports from the country grew by 13% year-on-year between January and May, with over 66% of exports going to Europe and the United States.8

About QIMA - Your Eyes in the Supply Chain!™